General public values information about the impacts of weather conditions

CLIPS project started with a survey enquiring the needs and preferences of six week forecasts. Survey managed to collect ideas and opinions from over 400 Finnish citizens. Results of the survey have helped in designing the six week forecasts to be piloted during the project.

Survey was carried out last spring and its target group was the Finnish general public. We asked particularly questions related to the presentation of the forecast products, e.g. visualization and amount and content of the text supporting the forecasts. In addition to this we gave examples of possible six week forecasts for different seasons and asked the general public to pick up the ones they found useful for themselves.

CLIPS project aims at promoting the use of extended range forecasts and develop them to be more user-friendly. General public is often more familiar with weather forecasts, which describe weather in detail at a certain time and in a certain place. Forecasts that extend from weeks to months are different in their nature, and therefore the information they contain can be hard to interpret for users.

Finns welcomed the forecasts supporting the preparation for winter conditions

In the survey we gave examples of possible six week forecasts for different seasons and asked the general public to pick up the ones they found useful for themselves.The six week forecasts that had to do with winter conditions seemed to be especially interesting for the general public. The “sweather weather forecast” that estimates the probability of cold spells reached the first place. Another popular forecast products were estimating the need for winter tires and possible slippery and otherwise harsh traffic conditions.

Majority of the respondents considered the six week forecasts helpful in planning activities especially in their free time, such as hobbies or other outdoor activities. They also though that extended range forecasts could provide help in timing of certain activities (harvesting) or deciding on a time for an activity (when to have vacations).

Impacts of weather conditions proved to be valuable for citizens

Uusimaa (Nyland) stood out in the distribution of from which location the respondents came from. Uusimaa is the most populated region in Finland and it covers for example Helsinki, Espoo and Vantaa in the capital area. Despite the slight distortion there were respondents from almost every region of Finland. The profile was fairly even when it came to the living environment of the respondents. This means that the survey managed to get ideas from citizens living in different-sized cities as well as from Finns that inhabit the countryside and sparsely populated areas.

Six week forecast voted as the most useful was the “Sweather weather forecast”, which estimates the probability of cold spells. See the picture below for the full top ten. 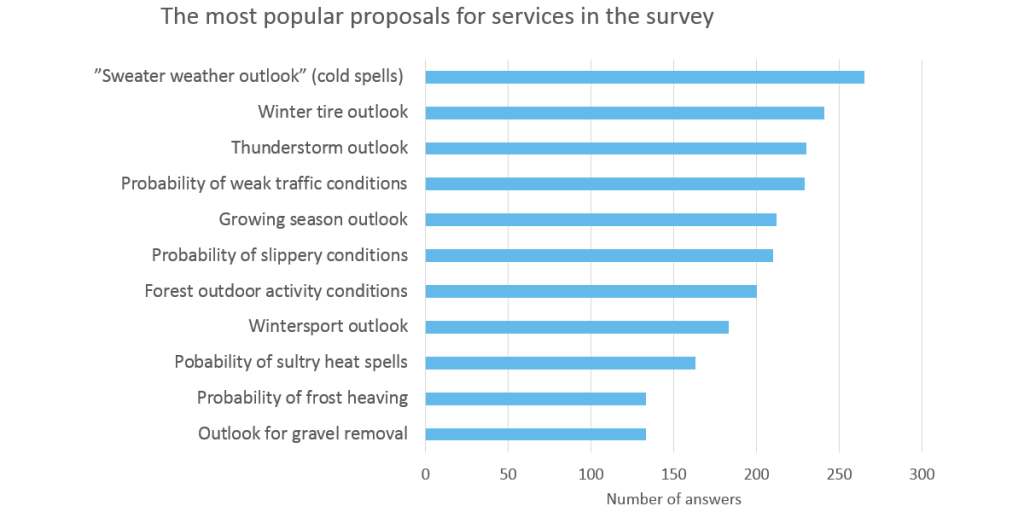