Chance of a thunderstorm?

Summer thunderstorms may interest people with their spectacularness, but as weather phenomena they can also be quite dangerous. The Thunderstorm outlook is one of the six week forecast products for the summer season. It describes the likelihood of thunderstorms and lightning during weekly periods.

The amount of thunderstorms in the Finnish climate is characterized by large annual variation, therefore the statistical average often doesn’t describe the truth for a particular year. However by combining statistics with forecast data it is possible to get an overview of the upcoming 3 to 6 weeks and see which one will most likely have the most thunderstorms. This can be useful information when planning outdoor activities such as hiking and golfing or it can help to prepare for the weather conditions.

“Prediction of thunderstorms is challenging even up to the next day because they are very local phenomena, so the forecasts for 6 weeks ahead are still on a purely experimental basis,” explains Terhi Laurila, a thunderstorm and storm researcher at the Finnish Meteorological Institute. “Still, the forecast models estimate the atmospheric conditions several weeks ahead and can give hints whether there are favourable conditions for thunderstorms or not.”

Climate statistics form the basis for the Thunderstorm outlook

The CLIPS project’s Thunderstorm outlook is based on the thunderstorm climatology in Finland and the predicted CAPE index for the coming weeks. CAPE (Convective Available Potential Energy), i.e. the potential energy of the convection, indicates the atmospheric instability and convection intensity. The large CAPE index, therefore, often indicates that the conditions for thunderstorms are favorable.

In a nutshell: Forecast data is used to modify the statistics-based index further. The index describes the chances of thunderstorms and lightning in the coming weeks on a five-step scale (very severe thunderstorms – weak thunderstorms).

How does the thunderstorm season look like in the forecasts?

The past summer has been very calm when it comes to thunderstorms. Thunderstorm outlook indicates even severe thunderstorms in some areas during July, although in general the season seems to continue mostly with weak thunderstorms. Statistically July is the month with most active lightning in Finland.

“Forecast estimates the occurrence of thunderstorms on a weekly level, but it might overemphasize the statistics in some situations. For example, the regions of Ostrobothnia are likely to be highlighted in the July forecasts, probably because statistically there has been the highest degree of thunderstorms in the last 18 years”, Laurila says.

Experimental six week forecasts are monitored and improved throughout the testing phase. For example, the layout of maps has already been refined and the color fixing is under work. Feedback from test users will be taken into account in the further development of the six week forecasts. Based on the feedback, the regional charts and major cities have been added to the forecasts.

Here’s an inkblot test for all the readers and piloters: Can you find an animal in the forecast map – or even two? Tip: The CLIPS team spotted at least a dinosaur and a sea horse. 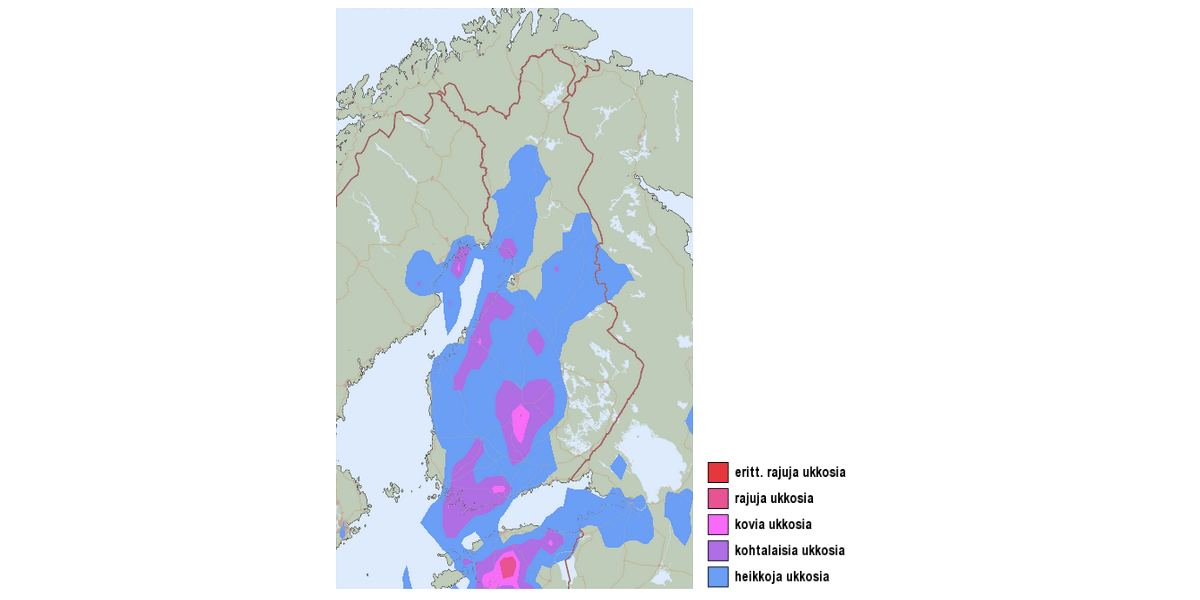